Last August I went meatless. It was interesting but I didn’t notice any particular health benefits and I didn’t lose any weight. This August I’m going low carb. You can’t go carbless or no-carb because, well, you need carbohydrates to live. But for a lot of people with pre-diabetes or Type 2 diabetes, like me, low carb is recommended.

I’ve done the South Beach diet before and honestly it was the only diet on which I lost significant weight. During four months one summer, between the end of July and about Thanksgiving, I lost nearly 20 lbs. But not to worry; they came home. So I’ve decided to try again. The true South Beach diet starts with almost total abstinence from most carbs. No refined flour, no potatoes (white, red, sweet or otherwise), no pasta, no rice, no fruit for the first two weeks, no juices except vegetable juice, no dairy initially. It’s tough. So I’m modifying it a bit. I’m saying “no” to the flour, pasta, potatoes,  and rice, but I’m allowing fresh fruit and dairy. I don’t eat a lot of either so allowing these shouldn’t impact the month too much. The hard part will be no bread or pasta. Also, I’m cutting out junk food, which eliminates potato chips, one of the basic food groups. I refuse to give up my diet Coke, however. This is an experiment, not a death sentence.

I began this morning with eggs, a staple of my breakfasts. Two scrambled eggs with mushrooms, onions, roasted eggplant, topped with cheese and homemade green salsa. I’ve never put eggplant in eggs before. They added a nice sweetness and I’l definitely do it again.

Lunch was cauliflower soup, raw veggies, cherries, strawberries (1/2 cup of both). Two sticks of string cheese made a nice mid-afternoon snack, but by 4:30 I was really hungry.

Dinner was an experiment in cooking. Nice New York cut steaks and corn on the cob cooked directly on hot coals. Add 1/2 cup of cottage cheese, 1/2 avocado and a couple of bacon wrapped, cream cheese stuffed jalapenos, and it was a tasty meal.

To cook meat directly on the coals, salt, pepper and coat with garlic liberally. Get a nice pile of charcoal (I didn’t have enough and had to finish the steaks in a cast iron frying pan), about 1100 degrees. For the corn, pull back the husks of the corn, remove the silk, and pull the husks back up. Tie with kitchen twine and soak in water for about 30 minutes. Then put everything on the hot coals. I used an instant read meat thermometer to get my steak to a perfect medium rare doneness. With the right amount of coals, I think it would have taken 10 minutes or less.

Tomorrow I have a luncheon. They always have delicious hard rolls and some form of potatoes. I’ll let you know how it goes.

For the record, here’s where I’m starting weight-wise. Yep, my tank is full. 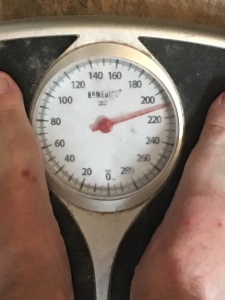