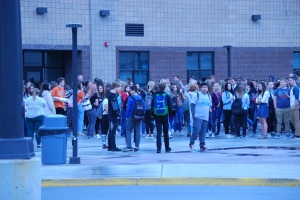 Today at 10:00 a.m. thousands of students left their classes to protest gun violence and to show support for students at Marjory Stoneman Douglas high school, especially the 17 killed, exactly one month ago today. Across the nation reaction by school officials was mixed, with some schools supporting the walkout, some threatening to discipline students who left classes and some taking no official stance but not interfering with the walkout or punishing students. There was also mixed reaction to the nature of the walkout, with some schools terming it a “gun violence” protest and others calling it a show of support and sympathy for all students affected by recent shootings.

In Cache County there are five high schools, four in the Cache County School District and one in the Logan City School District. Logan School District took the position that students, faculty or staff who participated in the walkout could be subject to disciplinary action. District superintendent Frank Schofield issued a memo saying that it is district policy not to endorse or participate in any type of student protest. “Endorsement of any one particular protest places us in a position of choosing whether to support future protests, which potentially places the district in a position of appearing to advocate for certain positions and not others.” However, he added that the district supports seeking government action to prevent gun violence in schools and that they “applaud students who choose to involve themselves in advocating for any position they believe in. . . .”

The Cache County district seems to have taken the middle road, neither approving nor prohibiting students’ participation. At Green Canyon High in North Logan a number of students left the school promptly at 10:00 and gathered on the east side. School officials were outside and one told me that the school didn’t approve the walkout, per district rules, but that the students have a right to gather. 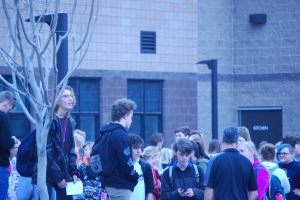 There were a few signs and a few comments but by and large it was a quiet though not necessarily somber gathering. Judging by the size of the crowd a number of students didn’t take part. There was one possible sign of counter-protest as this truck drove past the gathering, but there was no confrontation among the students. 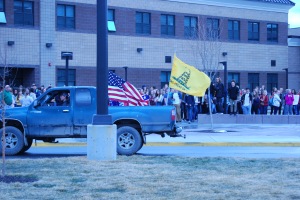 Two of the students, one a freshman, the other a senior and the organizer, spoke with the press. Both expressed their concerns over their safety in coming to school every day. The organizer said that she had tried to keep politics out of this, emphasizing that whether you’re for or against gun control, people’s attitudes need to change. 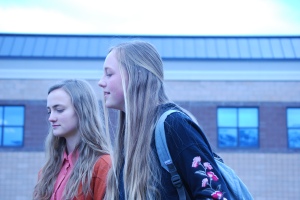 This latter statement gives me hope.  As I wrote earlier, we don’t necessarily have a gun or gun control problem; we have a cultural problem. As a society we embrace violence.  Until we can change that attitude we won’t make any inroads into the gun violence issue.