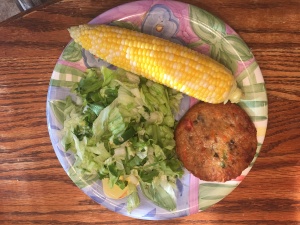 Nothing really has happened so I haven’t posted lately. I did eat meat on Wednesday and paid for it. We were in Logan Tuesday night. Brad and Mel invited to their third annual back to school pancake breakfast. The bus stops right in front of their house and for the last 3 years they’ve done a pancake breakfast for all the kids at the stop. They had a big camp grill, neighbors brought juice, fruit and a big pan of ham and bacon. I ate 3-4 pieces of bacon as I flipped pancakes. Then for lunch Nancy wanted Chinese and the egg foo young was calling to me. It had pork, not much, not even 1/2 a small pork chop worth.

Two hours later I was miserable. I was nauseated, my stomach was rumbling and gurgling and all I could do was lie there for about 45 minutes. Nancy says I probably just over ate, but I’ve over eaten before (yes, shocking I know, but true), and never felt this way. I attribute it to eating meat after being meatless for 3 weeks.

I’d been warned about eating meat again after going without, but I didn’t expect this relatively small amount to affect me this way. I could see it if I had eaten a 12-oz steak.  Although I haven’t noticed a marked difference in how I feel on a veggie diet, I have seen a big decline in indigestion at night. It makes me think, what IS meat doing to us?